And the (evil) power of the ‘Send’ button. 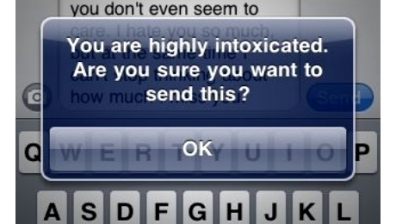 It’s kind of inevitable, isn’t it?

Boy meets girl*. Someone swipes right. Someone shares their newspaper on the train. Whatever. *Something* happens.
Boy asks for girls number. Girl feels like Beyoncé for the rest of the day.
Boy texts girl. Girl responds to text after what is deemed to be an appropriate amount of time has passed.**
Boy asks girl out on a date.
Boy and girl get emotionally tangled.
Something something, fast forward X amount of days/weeks/months/years and POOF!

But that’s not where the story ends, is it? Oh, no. That’d be far too easy. Well, firstly, depending on the state of how things ended there may be ice cream to be consumed and/or tearful conversations, heavy drinking, reminding yourself that you deserve so much more with a side of debauchery to be had.

But even when things end as amicably as possible, even if you part with the genuine intention of potentially hanging out as friends later (definitely later) on down the track, even in the best of circumstances the first few months following a break up are fraught with risk.

Why? Because there is a danger lurking. And it’s right in the palm of your dinging hand.

Well, now that you’ve broken up you are firstly faced with one of two options:

Personally, I have a tendency to go for Option 2 which, I would just like to add, does not mean that I struggle to get over every gent that I date. (That only happens with some of them.) However, Option 2 isn’t without its issues: You risk your dignity. You risk unparalleled regret and embarrassment. You risk your emotional well-being. You risk any future platonic-esque relationship with your former flame. Yet, we keep their number in our phone knowing that there is a high chance that we shall succumb in a moment of wine-and-Messina-fuelled weakness…

And yes, obviously “There is an app for that!”. (Tell me, what is there not an app for these days?) But just because it exists does not mean that I’m ever going to download it, let alone use it. Ha! I don’t need an app, anyway. I’ll be fine without it, thank you very much.

My phone is ringing.

My phone is ringing and I jolt when I read the screen, throwing my phone into the hands of the stranger beside me – anything to get your name away from me: that name which has run over my lips countless times, but which I have become unfamiliar with seeing flashing in my palm.

And then after the call rings out I do a victory dance (see: Queen Bey circa ‘Crazy in Love’) because I WON!!!!! I won the Who-Will-Be-the-First-Person-to-Call-or-Text-Since-We-Ended-Things Competition. The rules, in case you’re wondering, are exactly like playing The Staring Competition: in that the first to blink (or, in this case, text or call) loses.

And you definitely lost, buddy. Which you kindly confirmed with your additional calls and jerky typing. So, thank you for letting me win. Especially because I came very, very close to losing the competition, myself.

Don’t act so surprised. Of course I’ve missed you. How could I not? Missing the lovely parts of you and our relationship served as a reminder that there were good things intermingled in between the slightly shitty bits. But I reasoned that I didn’t want you to know that you were still on my mind. I nearly pressed ‘Send’ so many times… So, thanks for going first.

Hi. Thank you for your message. I am currently unavailable, but I will endeavour to respond at my earliest convenience. 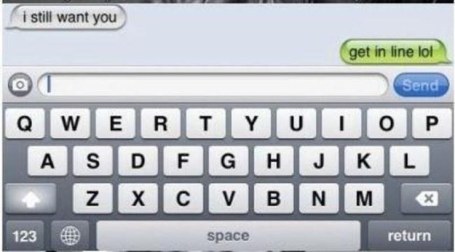 PS: For those who need inspiration in how to reply to an unwanted text from your ex, this was made for you.

** Which is a minimum of three hours in my books, peeps. On the off-chance that you give a damn.